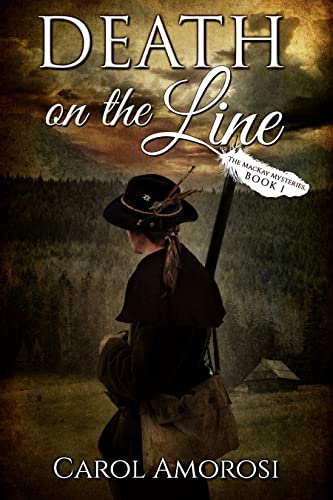 After eighty years of border skirmishes, Charles Mason and Jeremiah Dixon are sent to define the controversial boundary between the American colonies of Pennsylvania and Maryland. What if they hired an apprentice on their ground-breaking expedition?

Angus MacKay is a young Scotsman attempting to leave his demons behind and start fresh in the new world. On his quest, Angus makes new friends and discovers life in the unknown wilderness populated by different cultures.
His hopes of proving himself are shattered when he trips over a dead body and faces a sheriff who would like nothing more than to arrest him for the murder.

Will Angus's logical mind help him make sense of the seemingly random events? Will he learn the truth and, along the way, find acceptance for himself?

Death on the Line is a murder mystery in the style of a classic cozy. Amateur sleuth, Angus MacKay, is thrown into the midst of historical events and real people living in 18th-century colonial America. Interesting characters abound, each with their own agenda, including a rifle-toting minister convinced the natives are behind it all.

Book 1 of the MacKay Mystery series provides entertainment plus a puzzle to solve.